Two pieces of news from the ongoing strike and wave of rebellion inside the US prison system:

First, guards at the notorious Holman prison, a facility in Alabama that holds many Free Alabama Movement organisers, have joined prisoners on strike. The FAM report states that “The officers at Holman, who have been defying ADOC policy and speaking publicly to the media, had communicated their plans to F.A.M. members, and expressed their support for non-violent and peaceful demonstrations against the human rights conditions existent at Holman.

Officers have also complained about overcrowding and the need for a mass release, more education and rehabilitation programs, as well as issues with disease and filth. Officers reserved their harshest criticism towards the Commissioner’s officer and what they perceive as a lack leadership from Commissioner Dunno and Culliver.”

Buzzfeed has more, including video clips from inside the prison.

Over in South Carolina, it’s reported… 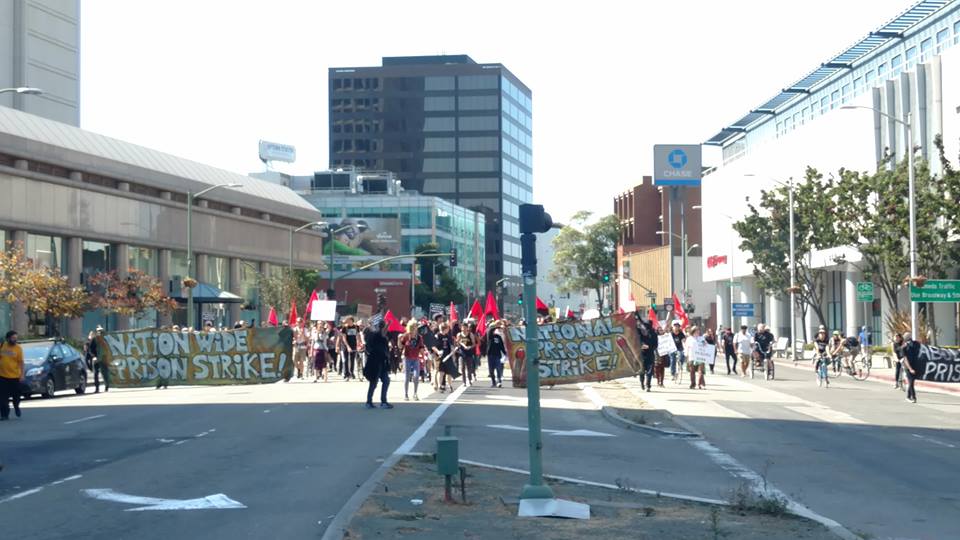 At this point, the US prison strike has been going on for well over a week. Due to the nature of the prison system, which is designed to cut off communication with the outside world, it’s difficult to say exactly what’s happening where, but there’s a few sites that are compiling information about the strike as it comes in. The best single place to stay informed is with the live updates from the strike hosted at Mask Magazine, who also published this piece on how outside support can affect the outcome of prison struggles, and It’s Going Down also has a huge amount of information, both on this specific page and across the whole site. The Dialectical Delinquents site also has a page of updates on worldwide prison struggles, and the Support Prisoner Resistance, Incarcerated Workers’ Organizing Committee, and Free Alabama Movement blogs…

The news is not good

We hate to be bad news birds, but we need to tell you that Riseup will run out of money next month. We had a number of unexpected hardware failures, lower-than-expected regular donations, and a record year of new Riseup users which puts more financial pressure on us than ever before.

We need your help to keep things going this year, so we are starting a campaign to ask Riseup users to give us just one dollar!

Can you give us a dollar? There are a lot of easy ways to do it: https://riseup.net/donate
Is it really worth giving just a dollar?

Yes! It might seem inconsequential, but if you and every Riseup user gave us just one dollar, that would  fix our current financial problem.

Riseup is now delivering over a million messages a day, but we need your help if the messages are to keep flowing. You know the importance of alternative infrastructure. You know the importance of communications systems that put people before personal tracking and corporate profiteering. We *need* at least 5% of our users donating monthly to be sustainable. Can you become a monthly donor?
Spread the word

Are you friends with a carrier pigeon? Do you know Morse code? Are you skilled in building signal fires? Help us spread the word about this campaign with your community. You can even use the internet, that might work too.

Not everyone can afford a dollar to donate. We provide services to so many people and social movements around the world, many in places where even one dollar is a lot of money. If you can give us one dollar, maybe you can cover one other person by giving two?

In Europe it is now easy to give to Riseup with a simple bank transfer! Tell your friends that it is finally easy.

Really! Truly! Thanks for all that you do, day in and day out, on our long march toward making the world a better place. If you can, help us continue our work, too. That would be excellent. https://riseup.net/donate
[en, de, pt, es, fr, it, el]

ATMORE, AL – Over the weekend more than 50 protests erupted across the country and around the world in solidarity with the September 9th nation-wide prisoner work stoppage and protest. Mothers and Families, the outside support organization for the Free Alabama Movement (FAM) rallied with drums and noisemakers outside of Holman Prison while workers kicked off their strike inside. “Officers are performing all tasks” a prisoner texted outside supporters indicating the prisoner work stoppage was successful.

Although the full extent of facilities participating in the strike will not be known for another two weeks, we have received early reports of work stoppage and resistance from Holmes, Gulf and Mayo units in FL, Fluvanna prison in Troy VA, and unnamed units in North Carolina and South Carolina. Central California Women’s Facility, Oregon State Penitentiary and St Cloud Correctional Facility in Minnesota were on lockdown in response to organizing on Friday. Hundreds of prisoners started fires, attacked surveillance cameras and damaged the facilities at Kinross Correctional in Northern Michigan and Holmes Correctional in Florida. No one was seriously injured and prisoners are refusing to
work.

There are confirmed hunger strikes underway in Wisconsin, Ohio, California and Guantanamo Bay. At Merced County Jail in Central California family of inmates have reported that the hunger strikers were threatened with shotguns and dogs. In Ohio there are at least two prisons, Lucasville and Ohio State Penitentiary, where prisoners went on hunger strike beginning September 9th. Prisoners at both Ohio prisons have reported being threatened with being stripped of their contact visits in retaliation for going on strike. We stand in solidarity with prominent US Army whistle blower Chelsea Manning, who initiated a hunger strike on September 9th to protest lack of adequate medical care for trans prisoners.

In Greece and across the US, protests occurred outside of jail, prison and immigrant detention centers. Three large banners were held up facing the Southern Ohio Correctional Facility in Lucasville Ohio, the site of a massive and deadly prisoner uprising in 1993. The Campaign to Fight Toxic Prisons rallied outside Buckeye State Prison in Arizona, one of many prisons where pollution and contaminated water harm prisoners.

US Embassy protests occurred in England, Australia, Sweden and Germany. From Oregon to Florida and in between, companies profiting off prison were targeted by outside protesters, including Bank of America, McDonalds, Aramark, AT&T and Starbucks. In Lansing Michigan protesters blocked a downtown intersection for hours with a large UHaul truck. In New York City and Durham North Carolina they blocked freeways. In Portland OR protesters disrupted an AT&T and McDonalds, both corporations which use prison labor, as well as held a noise demonstration outside a local jail, then they shut down traffic. There were arrests in: Oakland, CA; Milwaukee Wisconsin; Nashville, Tennessee; and Atlanta, Georgia. Most were quickly released, but at least three protesters in GA are facing multiple felonies.

Note date has changed to avoid clashing with the county show.

“Again we need to show the CCG that they can’t play with our children’s lives we need Kingfisher and SCBU, not forgetting maternity. Please join us at 1pm at top o town car park with a view to be setting off at 1.30pm. Speakers TBC.  After the March the Dorchester Round tables have their cider festival with live bands and plenty of entertainment for your children, we will finish the March at the borough gardens in time for the festival to start.”

The entire N.H.S. is under siege from this parasitic regime, we need every bastard we can get out for this, come on!

On 9th September the largest prison strike in history will sweep the USA. All over the world incarcerated workers and their allies will take action in solidarity. From Anarchist Prisoners in Greece lending their support in communiques and refusing to go to their cells to info nights and noise demos in the UK – inside and out people will be taking action.

The IWW’s Incarcerated Workers Organising Committee is calling for a communications blockade of Lend Lease on Friday the 9th of September. facebook event

In the UK we face massive prison expansion with 9 new mega prisons. Lend Lease is the main construction contractor for the North Wales Prison in Wrexham, which will be the second biggest in Europe, holding 2100 people in cages.

As well as being a Tory Party donor, Lend Lease recently attained notoriety when it was fined $54 million after a three year investigation by the FBI that proved that they had defrauded the public purse whilst working on projects in New York including the 9/11 Memorial and Grand Central Station.

This is your chance to stand in solidarity with those putting everything on the line in their fight against the prison industrial complex as part of this historic prison strike. E-mail, Phone and Tweet Lend Lease what you feel about their profiteering from caging human beings.

This Call to Action was written by prisoners in Alabama, Mississippi, Ohio, and Virginia who are calling attention to contemporary exploitation of their labor as prisoners. Their choice in using the language of slavery reminds us that the Thirteenth Amendment did not abolish slavery and involuntary servitude when used “as punishment for a crime.” Acknowledging that slavery invokes a specific history of oppression and anti-Blackness in the United States, the prisoners consciously address the racism of contemporary policing and prisons, which disproportionately impact communities of color and especially Black and Native American communities. The IWOC Call to Action reminds us all that “Certain Americans live every day under not only the threat of extra-judicial execution – as protests surrounding the deaths of Mike Brown, Tamir Rice, Sandra Bland and so many others have drawn long overdue attention to – but also under the threat of capture, of being thrown into these plantations, shackled and forced to work.”

Part 1 of Kinetik on Democracy Now! talking about prisoner resistance

Part 2 of Kinetik on Democracy Now!

It’s Going Down in depth interview with IWOC

SPR Follow Up Article on the May Day Strikes in Alabama

Texas IWOC pamphlet about the past few years of prisoner struggle, the recent Texas prisoner work stoppage, and an explanation of IWOCs contributions

An empirically heavy mind-game for the debate on working class strategy: First steps in a six-month revolutionary transition period in the UK region

We’ve written a few texts on ‘revolutionary strategy’ before, focusing on the relationship between workers’ existence within the social production process, experiences of day-to-day struggles and the possibility of a wider working class movement – termed by others as a ‘social strike’. [1] While we maintain that we will only be able to make fruitful organisational proposals through an analysis of the concrete day-to-day struggles of our class, we think that it can’t do any harm to discuss what we think a revolutionary situation in the 21st century could look like. Thinking about tomorrow might make clearer our view on today.

We are not alone in this. Since the uprisings in 2010/11 (‘Arab Spring’ etc.) and the general upsurge in social movements and global…