The London Anarchist Federation’s monthly reading group will have its twenty-seventh session on the 23rd of August at 19:00 at Decentre, just above Freedom Bookshop (84B Whitechapel High St, London, E1 7QX). The bookshop will likely be closed by that time so we will be using the back door to the freedom building, further into the alleyway than the bookshop entrance.

Given the recent increase in labour militancy in response to the rising cost of living, this reading group will be on how anarchists relate to unions and workplace struggles in general. There are two articles which we will be reading, with different perspectives on the issue:

From Union Renewal to a Self Managed Society, by Lucien Van Der Walt, is more optimistic about the possibility of unions as a vehicle for working class struggle against capitalism.

RMT striking rail workers are leading the way – join them!

At the Firkin Shed Bournemouth.

Braden Wallake, owner of HyperSocial, a company that specialises in doing pointless things on the internet, posted a picture of himself weeping after he made a load of staff redundant from their bullshit jobs. “This will be the most vulnerable thing I’ll ever share,” he blithered.

He’s a lot more vulnerable than he thinks. It’s time we gave the bosses something to cry about! Do us all a favour Braden and have a chat with a shotgun, we won’t miss you. 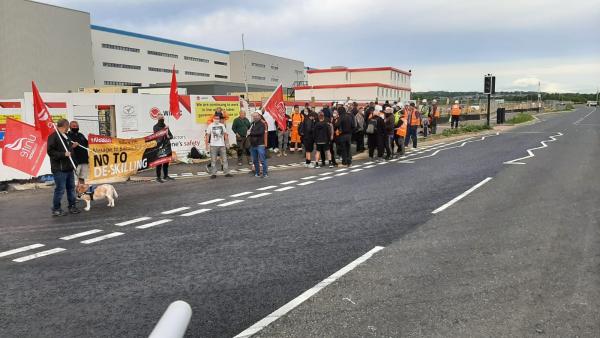 Construction and engineering employers have begun warning their workforce against taking part in a wildcat strike over pay on Wednesday 10th August, as strike action has spread from unionised workplaces into new areas such as Amazon warehouses.

Recent weeks have seen industrial action across the UK, as official strikes called by unions such as the RMT, Unite and CWU have been joined by unofficial wildcat actions. The wave of wildcat actions started with a strike at Cranswick Continental Foods in Pilsworth, and has now spread to Amazon warehouses, with workers at sites in Tilbury, Rugeley, Coventry, Bristol, Dartford and Coalville walking off the job or staging unofficial slowdowns over pay, and reports of the action spreading to Belvedere, Hemel Hempstead and Chesterfield.

Wednesday 10th August could see an even more dramatic escalation, as rumours are spreading of a national wildcat strike among engineering…

The London Branch of the IWW stands with the rail workers in their ongoing dispute. They are fighting not just for themselves, but for us all: as well as their livelihoods, the safety standards of the British rail network are under threat. The government-backed rail operators are attempting to reduce staffing levels on platforms, trains, and tracks in order to drive down wages, which they see simply as an overhead cost. Further, they intend to rehire many workers on zero-hours agency contracts in order to circumnavigate labour rights such as paid leave for holiday, sickness, and parenthood as well as allowing them to dismiss workers without notice or redundancy pay.

The transport industry is one of the few remaining industries in Britain with high union membership. This attempt to break it up by dividing the workforce is a direct attempt to weaken the unions, and the labour movement as a whole.

On top of it all, comes a slap in the face: during this period of exaggerated cost of living, and while the shareholders take home millions in profit, they are offering the workers that they aren’t trying to sack a real-terms pay cut.

However, the workers are standing strong: in the face of an endless torrent of vitriol from the British government and press, they are taking every opportunity to expose the inequalities and injustice that they face. Members of our branch have been proud to stand shoulder-to-shoulder in solidarity with these workers on the picket lines, and we will continue to offer our support until the dispute is won. As long as we continue to stand together, we can tip the balance in the favour of workers around the world.

Mutual aid is the currency of solidarity; direct support for the striking worker is crucial to their success. As such, the IWW London branch are setting a budget to allow members to donate food and drinks to workers on the picket lines, and we encourage any members or supporters with the means to make a donation to the strike funds.

The momentum of the union movement is growing once again in Britain after half a century of targeted assault. Public support is on the rise, and workers in unions across the country are balloting to take action and stand up for their rights and their dignity. The doubling-down on anti-union rhetoric by the government and press is evidence that they are aware of the power that a unionised workforce wields, and that they are threatened by it. The IWW welcomes any and all workers both in and out of employment and of any nation, race, gender, or creed. Together we stand for a fairer world.

UNITED VOICES OF THE WORLD

The Met issued a written apology and paid £3,000 in compensation to Franck Magennis, a barrister at Garden Court chambers and former head of UVW’s legal department, for arresting him while on a picket line outside the St George’s University Hospital in south London on January 13 2020. The police turned up in large numbers, distributed leaflets on behalf of the university to dispel the lawful picket and threatened the workers and union officials with arrest unless they left the campus. They detained and handcuffed Magennis when he enquired about the legal basis for the warning.

In the apology, signed by Inspector Andy O’Donnell of the Directorate of Professional Standards Civil Actions & Inquests, the Met apologised to Magennis, for

As the Class War intensifies across our island, Dorset IWW members have supported rail and telecomm’s pickets in Bognor, Bournemouth, Dorchester, Poole, and Weymouth, alongside members of many other unions and none.

The RMT and CWU are striking for us all and will soon be joined by a broad section of the Working Class.

It is no longer a matter of which union you belong to or the specific industry in which you are exploited. We must stand by our Class, right or wrong and bring down this venal, corrupt regime that offers us nothing but destitution, war and environmental catastrophe.

Attitudes to the political/boss class are hardening, the failure of the Corbyn experiment at last signalled the death of possiblism, We really don’t have time to wait for a hypothetical social-democratic government, so let’s seize the moment and get on the streets!

“No saviour from on high deliver, no faith have we in prince nor peer.
Our own strong arm the chains must shiver, chains of hatred, greed and fear”