Liverpool IWW members and anti-workfare activists held a very successful demonstration against B&M stores in the Toxteth area of the city this afternoon. Over a two hour period, a rolling cast of around thirty of us leafleted and spoke with customers, banged pans, chanted and generally let people know what a load of benefit cheats £100 million profitmakers B&M are. In doing so, we took part in a nationwide day of action against the company. 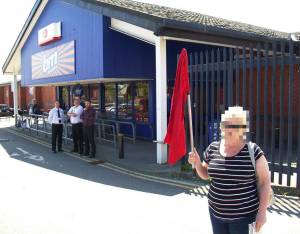 The demo was due to start at noon, and at one minute past, a police van pulled up in the car park. The company’s security team had already been patrolling the perimeter, making it very clear that we would not be allowed inside to talk to staff. No matter. Their actions only drew attention to the fact that B&M have something to hide. So to any B&M workers (paid or unpaid)who have reached this page…

Sponsor a room. Just £715 will pay for for a charity chief executive to stay in a top hotel for two nights. Please give generously. You fucking mug.

Charity Chief Executives and so-called housing experts are gearing up for this year’s homelessness industry conference which is due to be held at a four star hotel with ticket prices as high as £715!

Next month’s Under One Roof conference is organised by charity umbrella body Homeless Link and provides a chance for homelessness experts to talk about homeless people without any actual homeless people being present.  This year’s swanky bash is being held at the Hinckley Island Hotel in Leicestershire where according to Homeless Link  “Delegates staying overnight are also entitled to complimentary use of the leisure club facilities, which include a heated indoor swimming pool, fully equipped gym, sauna, spa, steam room and solarium.”

Were somebody who is homeless wishing…

Solidarity Picnic on Hackney Downs in support of strike fund.

Dorset wobs in London for the anti-austerity demo and a fund-raising gig at the London Action Resource Centre were pleased to accept an invitation from striking teachers to a picnic on Hackney Downs. We enjoyed good vegan food and a good craic with members of Unison, UCU, SolFed.and their supporters.

Workers at Hackney Community College are on strike today, the 23rd of June against massive cuts to jobs and courses at the College in Shoreditch, East London. Many of the staff are hourly paid casualised staff and thus particularly in need of strike funds.

Just got back from Dorchester where a couple of thousand people marched against the closure of the Kingfisher children’s ward at Dorset County Hospital; estimates vary between one and three thousand. Unless you believe the Echo who put it in the hundreds, odd since they are publicly supporting the campaign.

Conspicuous by his absence was ‘Evil Oliver’ Letwin, who has been hedging his bets, he would not have had a pleasant experience, we think. The march was good-natured but shows the strength of feeling in West Dorset about keeping our health services local, it was organised in a week and people required little prompting to turn out.

This is a grass-roots phenomenon bubbling up from the ground. The left are running to catch up; what will it take to get the unions to put their weight behind this? The workers at the hospital would be a good place to start… 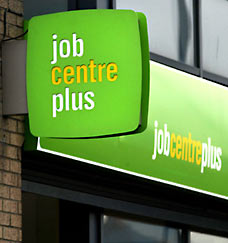 There is a way to help unemployed people who have ‘failed’ workplace assessments and a way was found here in Dorset.

A fellow worker with quite severe adult ADHD and anxiety disorder was recently the victim of a ridiculous workplace assessment and found totally fit for work without any consideration for his condition.

The fellow worker is in possession of a letter of diagnosis dated October 2014 that his ADHD and anxiety are so bad that he is unfit for work.

The fellow worker is also a single parent.

After the assessment ‘fail’ his ESA was immediately stopped and he was informed to file a claim for JSA and search for a job. No support, no guidance, nothing.

The fellow worker asked me to accompany him to the job centre and I did so.

The initial appointment was basically a ‘get the claim filed’ exercise designed to last about 10 minutes. This was no problem.

The fellow worker asked for another appointment more appropriate and was told ‘no’.

The fellow worker then asked me for assistance. Together we demanded an appropriate appointment and the second time around after some faffing around in a back area we were given the appointment we wanted.

Getting this wish gave us 7 days to formulate a strategy to try to avoid the fellow worker being put into a position where :-

1. His mental health would deteriorate

2. He would be unable to take and collect his daughter to and from school

3. He would be able to construct a meaningful appeal against the work assessment’s ridiculous findings.

The answer was a good old fashioned GP’s sick note that the fellow worker had obtained at a GP’s vist immediately after the 10 minute interview at the jobcentre.

The fellow worker and I attended the job centre for the 40 minute appointment and rather than let the JC adviser control the interview the fellow worker took immediate control and presented his sick note clearly stating that he was signed off from work for 3 months with an anxiety disorder.

This gave us everything we wanted. The job centre adviser was forced to concede that JSA can be paid for up to 13 weeks on production of a sick note without there being any pressure on the claimant to search for work or be on any kind of workfare program.

I am pleased to say that our fellow worker will now be paid for 3 months at the full adult jobseekers rate, is under no pressure to attend the job centre, search for work or be mandated to attend workfare.

The pressure is now off and the task ahead is for our fellow worker to put together an appeal and have his ESA re-instated.

The important point in all this is that there is a role for union reps with job centre claimants.

The fellow worker approached the union for help and together we were able to identify a strategy that would achieve what the fellow worker wanted and we left the job centre fully satisfied with the outcome.

Credit goes to the fellow worker who owned the problem and with union assistance worked out his own solution.

He did tell me that support from the IWW had been crucial in him obtaining the confidence to clearly dominate the proceedings at the job centre and get the result he wanted.

He was quite anxious that because his ESA had been stopped, without an income he and his daughter would have problems being able to feed themselves and pay their rent.

I am please to report that this fellow worker and his daughter are now safe for 3 months pending appeal thanks to his presence of mind and appropriate IWW support.

Dorset Wobs will be supporting the march in Dorchester on 13th June, top of town car park at 11 a.m.

A group of around 30 mothers came together today for a flash demo at Vespasian House, Dorchester, outside a meeting of the Clinical Commissioning Group. The protest, which was self-organised through social media, is over a plot to close the Kingfisher children’s ward and Special Care Baby Unit at Dorset County Hospital and move the service to Poole or Bournemouth They were supported by a member of the local Unite community branch and the driver of a bus stopped to show his support.

The protesters were met by someone calling himself an ‘engagement director’, who suggested a small delegation might be admitted to the meeting – and get fobbed off by a gang of suits – but the women were having none of it. The Unite rep told him: “Looks like you’ve got a Spartacus situation on your hands”

We hope the campaigners will stick to their…

Under the one-party dictatorship, workers in China are still deprived of the three labour rights: freedom of association, the right to strike, and the right to collective bargaining. Their struggles for labour rights often lead to oppression from government officials and employers. Meanwhile, due to the undemocratic political system and collusion between government and enterprises, workers in Hong Kong are similarly deprived of standard working hours and the right to collective bargaining.

As Chinese workers become aware of their legal rights, they are more courageous in their struggles which are also becoming more frequent. In the meantime, apart from forcing labour organizations to close down their offices, local governments are gradually turning to the use of violence and detention as repressive means against workers who are often forced to accept resignation compensation which is much lower than what is stipulated in the law.   In the…

We’ve just celebrated the UK IWW’s historic 1000 members conference. At a time when a lot of the Left are lamenting the recent general election results, this is a welcome milestone.

Yet we should always be pushing ourselves and others harder – how many of these 1000 red card holders are actively organising their workplaces? In IWW circles it’s a given that the quality of members is far more important than quantity. We are after all a union that does things properly, rather than one which acts on the lowest common denominator.

This article is about internal development towards the militant organising culture that the IWW was founded on. One where the expectation is that every Wob is organising their workplaces through solidarity unionism, creating workplace committees and taking direct action to rebuild workers’ power. By stepping up, we can level up the union. But also, by stepping up we… 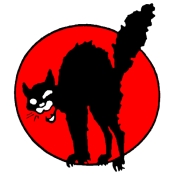