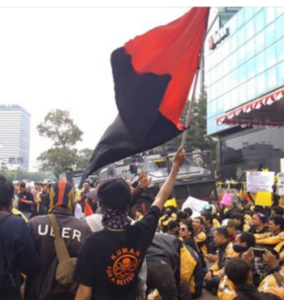 Across the world, workers are finding our jobs and lives reshaped by the new precarious forms of employment associated with app companies like Uber and Deliveroo, and wherever these new conditions arrive, people are fighting back.

Since the start of 2018, Deliveroo workers have taken action in Hong Kong, Belgium, France, Holland and Germany. You can read a fuller report from the Hong Kong strike here, and there’s an 8-minute video with English subtitles showing some of what happened in Berlin:

Meanwhile, over in Indonesia, Uber drivers have formed KUMAN, a union influenced by anarcho-syndicalism, which has grown to around 6000 members and taken repeated strike action, as documented in this interview. The interview also comes with a 30-second video showing some footage of KUMAN’s actions, including a beautiful moment where someone spraypaints “‘DELETE UBER” on a wall while still wearing their Uber uniform: